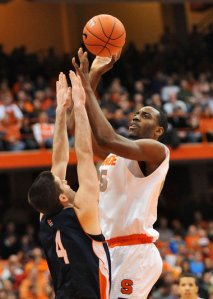 Tonight, we watched our team, Syracuse, fall to Ohio State (77-70) in their drive for the Final Four.  Despite this loss, their overall record was an amazing 30-1 in the regular season.  What does Syracuse have in common with Christmas? While they didn’t receive a miracle this year, freshman Rakeem Christmas remains one hope for the future, with 6 points this game and a total of 96 points for the season.

He is not the first to link between Christmas and basketball excellence. Santa’s workshop produced another Pennsylvania native, Dionte Christmas who played for Temple. In 2008, Temple won the Atlantic 10 Conference, where Christmas was named Most Outstanding Player of the event after scoring 57 points in the three games, including 22 in the final game. After a short stop with the Philadelphia 76rs, he is now playing professional basketball in Greece.

Syracuse may be out of the tournament this season, but they are not out of Christmas surprises.  Nerlens Noel, the 2012 top high school recruit has narrowed his final choices to Georgetown, University of Kentucky and Syracuse.  We’re hoping he’ll choose Syracuse!

As we count down to Christmas 2012, I’ll have plenty of Christmas basketball to watch next winter.