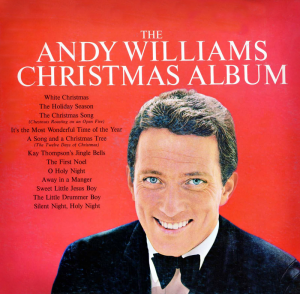 Yesterday we all received the sad news that after 84 years crooner Andy Williams had died.  This is quite a loss to the singing world, and especially the Christmas music world.  Andy was born in Iowa into a musical family.  He had a fortunate break to get connected with many powerful players in the music industry, like Bing Crosby.  He was so popular he hosted the Grammy Awards show 7 times in a row.  He won Grammy and Emmy Awards.  He even sang the National Anthem at the 1973 Super Bowl.   Andy was part of America and welcome into families homes on the Andy Williams Show.  He was even a friend to the Kennedy family.  Few probably know that he was a close friend of Robert Kennedy and was at the Ambassador Hotel when he was assassinated.  Williams sang at his funeral at the request of Mrs. Kennedy.  But it was when Andy sang the songs of Christmas that he sealed his place in all our hearts.

Andy Williams was known affectionately as “Mr. Christmas”.  This could be because of his annual Christmas Specials that ran regularly from 1962-1974 and intermittently into the 1990s.  These tv specials were hugely popular and a part of millions of Americans Christmas traditions.  It might also be due to his eight Christmas albums.  The albums were top sellers.  I can remember in my childhood the bright red album cover of the record and looked forward to hearing it on my parents stereo.  In college I had my own copy of the Andy Williams Christmas Album on cassette.  Today you can get your copies on iTunes.  Of all his Christmas recording, It’s the Most Wonderful Time of the Year is still the most popular.  It appeared on each and every one of his Christmas albums.  I can’t think of that song and not hear Andy Williams.   He will be missed.