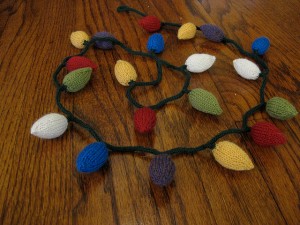 Podcast #65- 90 Days to Go! Click here to listen to the newest podcast- Knitting ornaments and Trivia too!

Listen in to get the latest updates on the Yule Log’s entries for the 2014 Festival of Trees, some quizzes on Christmas Trivia, and an update on the return of our daily posts.  Natalie and Jeremy talk about some Christmas yard sale finds and deliver more details about their tree designs.  You too can be part of the Festival- volunteer to help with the fun!

On this cold, cold day, I thought it was appropriate to re-visit the Christmas statistics from the National Oceanic and Atmospheric Administration (NOAA).  Each year, they release Christmas weather statistics for the meteorologically curious.  Outside, this morning, it was a mere 1 degree.  How does that compare to recent Christmases?

In Baltimore, the coldest Christmas on record was within this lifetime–1983 with 3 degrees outside.   The second coldest was 1872 when it was 5 degrees.  In contrast, in 1964, it was a crazy 72 degrees.  Hard to imagine wearing shorts on Christmas when we’re all bundled up inside today.  According to the Farmers’ Almanac, the 1980’s were some of the coldest Christmases on record.

I prefer the Norman Rockwell snowy version of Christmas, even though we’ve seen only a few in the past 50 years, with over 5 inches on snow in 1962 and a little over 4 inches in 1969.

What to do?  Stay inside and keep busy preparing for Christmases yet to come.

Happy 2014!  I am excited to be writing my first post in the new year.  I’ve been trying to come up with an organizational plan for my weekly posts.  I work much better if I have a plan, or perhaps theme, to guide my actions.  So for my first Thursday post each month I am going to focus on music!  No better place to start than with my absolute favorite Christmas song of all time- O Holy Night.  This song has been at the top of all my lists for years.  It is musically sound and even the worst versions can still prove somewhat enjoyable.  But when it’s good, O yeah!

The song originates in France.  It was written by Adolphe Adam in 1847  for the poem Minuit, Chretiens (Midnight, Christians).  The first performance was in a small french church to celebrate the repair of the organ.  The first singer was a well-known opera singer of the day.  The topic of the poem, and thus the song, is the birth of the savior and our redemption as man.  Check out the opening verse and chorus:

O holy night! The stars are brightly shining,
It is the night of our dear Saviour’s birth.
Long lay the world in sin and error pining,
‘Til He appear’d and the soul felt its worth.
A thrill of hope the weary world rejoices,
For yonder breaks a new and glorious morn.
Fall on your knees! O hear the angel voices!
O night divine, O night when Christ was born;
O night divine, O night, O night Divine. 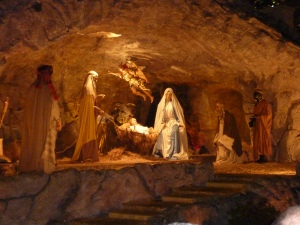 The song has always had great success over the last 150+ years.  It has been recorded by world renown singers, bands, choirs, and orchestras.  It is part of many small church repertoire for the holidays.  Notably it is part of history as well.  In 1906 it was the first live performance on the new AM radio program.  That first broadcast version featured voice and violin.  It is truly timeless.  A recording made in 1916 is still being sold today!

One of the things I resolve to do with Christmas music this year is to find new versions of songs I love.  For O Holy Night I discovered a great version through a post on a friend’s Facebook page with a recording of Auld Lang Syne.  It featured three singers from the Broadway show Spider-man singing acapella.  I went a little further with some Youtube searching and discovered the had a recording of O Holy Night.  Not just their version, a great version.  Give it a listen-

This is my new go to favorite for this tune.  (Bonus is that one of the three guys is a JMU alum- Go Dukes!)   As I sit here watching the snow fall on a cold winter night it definitely fills me with the spirit of Christmas!

Noah’s grandmother Christine is the first to decorate the day after Thanksgiving, and she is also the first to pack her decorations, just hours after December 25.

Holiday lights, train, and other displays are disappearing, many ending with the new year, often around the 12th day of Christmas, January 5.

Until January 12, you still have time, though, to witness one of the best gingerbread displays in America, Gingerbread Lane, at the New York Hall of Science in New York City.  This gingerbread display, designated as Guinness World Record Holder, is celebrating its 20th year.  It is the handiwork of one man, chef Jon Lovitch, and he works all year to build his sugar-coated creations.  Here is a great New York Daily News article that includes several videos demonstrating the construction process. What I like best about Lovitch is that he has a PLAN that puts  The Yule Log 365 to shame.  Here’s his annual timeline–and Lovitch does all of this while holding a full-time job!

On January 12, Lovitch disassembles the village and gives away the individual parts—houses, trains, and other confections.  The give-away begins at noon–bring your own cardboard box.

The Capitol Christmas tree was lighted this evening.  I wasn’t there, but the video of this evening’s ceremony was posted on Reuters.  Multi-colored lights?  I don’t know how I feel about that.  The tree is beautiful, though.  I hope Roger and I have an opportunity to go to Washington, D.C. this Christmas season.  There are so many tree traditions in our nation’s capital!  New York City, make room.

On the radio this morning, I heard about a tree that I MUST see this season.  A lesser-known Christmas tree that was lighted today is the Union Station Christmas tree, an annual gift from  the Norwegian Embassy to all Americans.  This tradition, started 16 years ago, usually features a tree decorated with Norwegian ornaments, flags, and other items of national significance.  This year, the tree is decorated with 700 reflective ornaments of Edvard Munch’s famous painting, The Scream.  I’ve included a link here to The Washington Post article.

Multi-colored lights?  Symbols of modern suffering?  What is Christmas coming to? 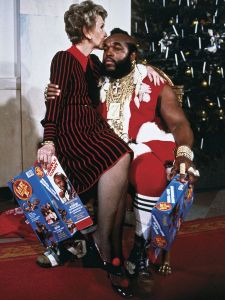 We’re back!  Finally Natalie and I found the time to get back to our podcasts.  We are so sorry we have been neglectful of our Christmas audience!  We are back to it, good thing too since there are just 6 months left until Christmas 2013.  Today we get back in the swing with things by making sure you KNOW about lots of very weird Christmas gifts, practices, and ornaments.  We then talk about getting your PLAN in order for this year.  Be it saving, organizing, creating, building, or searching, time is running out to get that special thing finished in time for the holidays.  We close out with making sure we have something to DO.  Jeremy is on the hunt for odd Christmas treasures and building my own nativity.  Natalie is meeting with her mom to set the craft calendar for the rest of the summer.  Thanks for sticking with us and keep checking for more regular updates.  Merry Christmas!

If you’ve been keeping up here at the Yule Log, you will remember us introducing you to the International Santa Claus Hall of Fame.  The purpose is to preserve and honor those who have greatly contributed to the Legend of Santa Claus.  The first class of honorees was names in 2010. Fourteen men served as charter members to the hall.  Today we look at three honorees of note.

Bill Strother, the Miller & Rhoads Santa, did his work at the famous department store in Richmond, VA.  Born in 1896 Strother started his career as a stuntman.  He started as Santa at the legendary store in 1942.  He took the role seriously.  His makeup was created by Max Factor himself and was incredibly realistic.  It took 2 hours to apply.  His Santa display was a real act.  He arrived by coming out of a chimney.  He used a concealed microphone with his assistant to learn the names of the kids before they got to his lap.  A news article in 1951 reported that he was the world’s highest paid Santa.  Tens of thousands of kids, and adults, would visit him until his untimely death in 1957 in a car accident.

Edmund Gwenn was the jolly Santa in the Hollywood classic, Miracle on 34th Street.  Gwenn was born in 1875 in Wales.  His father kicked him out at the age of 17 when he reveled that he wished to be an actor.  Gwenn found his way to London where he was lucky to be discovered by George Bernard Shaw.  Shaw would feature Gwenn in six of his plays.  The actor would take a break from the stage to serve in the army during World War I.  After the war he moved to Hollywood and found work in many films.  He iconic role in Miracle landed him an Oscar in 1947 for playing Kris Kringle.  Gwenn played Santa in the actual Macy’s Thanksgiving Day Parade in 1946 and 1947. 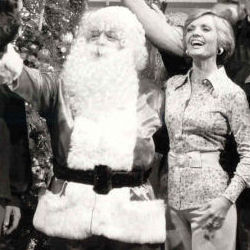 Robert George was known as the Presidential Santa.  George was born in 1928 in Nebraska and worked as a barber.  In 1949 George had a vision that he should live as Santa Claus.  After the vision he began living as Santa year round.  His first Christmas after that he spent the holidays being Santa for needy kids and sick seniors.  Fate seemed on his side when he was invited to be Santa in Washington for President Eisenhower.  In 1962 George moved to California.  He married Stella Chaney, daughter of screen legend Lon Chaney.  Their home was decorated year round for the holidays and was known as “Santa’s Dreamland”.  His role as Santa in Washington continued for Presidents Kennedy, Nixon, Ford, Carter, and Bush.  In 1997 his life was the basis for the Lifetime television movie “A Different Kind of Christmas”.  George passed in 1998.

There are so many great men, and even a couple of women, in the Hall of Fame.  Keep checking back for more about the most interesting ones in the coming weeks.