In my last post I shared a little about the dark companion to Santa, Krampus.  Natalie was not the only one to find him unpleasant and out of the Christmas spirit.  But we must look to all the helpers for St. Nicholas, not just happy, singing elves.  Krampus shows up in mainly Austria, Bavaria, Croatia, Hungary, and Slovenia.  He is just one of the darker companions found with St. Nick in our European history.  There are MANY others, here are a few: 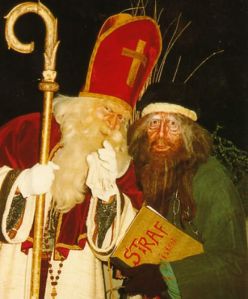 Knecht Ruprecht shows up as early as the mid 1600s in German folklore.  His name translates to farmhand or servant Rupert.  Ruprecht was also a common name for the devil at that time soon after the Protestant Reformation.  Knecht Ruprech appears in homes the night before St. Nicholas day.  He has a long beard and dressed covered in furs.  He carries a long staff and a bag of ashes and wears little bells. His origin story is a little muddy.  He might have been a farmer recruited by St. Nick, or maybe an injured orphan taken in by him.  Tradition also has some variation on how Ruprecht would “reward” the bad children.  Some tales have him call the children to the door and force them to sing or dance to show how good they were.  The good ones received treats, the bad were paddled, and the really bad were taken away.  Other tales say Ruprecht would only visit when the children were asleep and would leave gifts for the good and coal for the bad.  (Sound familiar to our American Santa Claus tradition?) 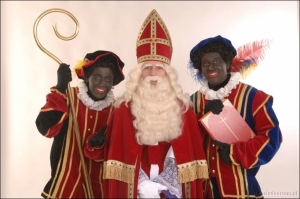 Zwarte Piet, or Black Peter, is St. Nick’s loyal helper in Dutch tradition.  Black Pete helps Sinterklaas as they check-in with all the children throughout the Netherlands.  Pete’s job is to accompany St. Nicholas and to give candied treats and special candies to the good children as Nicholas visits children in the community.  He also delivers treats or switches to the children at home.  His hands and face are covered in dark black soot and he wears brightly covered clothes.   Why soot?  Because he enters the homes through the chimney of course!  (Another familiar tradition with our American Santa Claus) 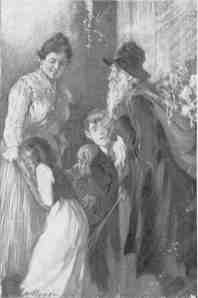 In southwest Germany St. Nicholas’ helper was Pelznickel.  This helper did not accompany St. Nick.  He visited the children on his own to deliver joy to the good and punishment to the bad.  He left shoes or socks full of candy for the children, unless they were bad- those children discovered coal or switches in theirs.  Pelznickel moved to the New World with the Pennsylvania Dutch.  The name morphed to Belsnickle but he  could be discovered in holiday traditions from the Chesapeake to as far north as Nova Scotia.  One of the earlier written accounts of Belsnickle in America can be found in Brown’s Miscellaneous Writings.  Jacob Brown wrote in the 1830s from Alleghany County, Maryland.  Here he describes Belsnickle:

He was known as Kriskinkle, Beltznickle and sometimes as the Xmas woman. Children then not only saw the mysterious person, but felt him or rather his stripes upon their backs with his switch. The annual visitor would make his appearance some hours after dark, thoroughly disguised, especially the face, which would sometimes be covered with a hideously ugly phiz … He or she would be equipped with an ample sack about the shoulders filled with cakes, nuts, and fruits, and a long hazel switch which was supposed to have some kind of a charm in it as well as a sting. One would scatter the goodies upon the floor, and then the scramble would begin by the delighted children, and the other hand would ply the switch upon the backs of the excited youngsters – who would not show a wince, but had it been parental discipline there would have been screams to reach a long distance.

Krampus and these other helpers are certainly scary and sometimes do bad things.  St. Nicholas needs these helpers to “scare” the children.  Not too different from some of our traditions (Elf on the shelf?) but definitely a darker side.